We are working on the development of a disease model using zebrafish, the function analysis of non-coding RNA, the biological effects of low dose radiation, and the construction of a database with the keyword “ribosomes”.It is a wide range of experiments (wet) on the bench using pipettes, as well as exhaustive information analysis (dry) by a computer.We aim for research that is good for the world of originality.

It is a complex consisting of about 80 types of proteins (ribosomal proteins: RP) and 4 types of RNA (ribosomal RNA: rRNA).It is said that there are hundreds of thousands or millions of cells in a single cell.The ribosome binds to mRNA, which is a copy of the genetic code, and the tRNA that converts the cipher into amino acids continues to produce the necessary proteins in one after another.

If the ribosomes cause any abnormalities…

It is presumed that the synthesis of the protein is not done correctly.Therefore, the cell will not be able to function properly, and it is likely to proliferate or to be eliminated abnormally.As a result, the disease group, which is thought to be caused, is now called ribosomal disease.A typical disease is a congenital red-bud hypoplasia of Diamond Black fan anemia (DBA).It is deeply related to the abnormality of the gene encoding the RP.In addition to hematopoietic abnormalities, it is also included in ribosomal disease, which indicates a disorder of keratinocytes, skeletal abnormalities, spleen and liver abnormalities.Recently, the relationship with cancer development is becoming clear.

Why do they cause a variety of diseases…

No one has found a definite answer yet.In the first place, it was thought that it was not possible to cause the disease even if the maintenance of the life was difficult in the ribosomes abnormal state.However, in 1999, 25% of DBA patients reported that the ribosomal protein (RP) S19 gene was abnormal.Mutations in the genes of constituent factors (RP and rRNA) have overturned the established theory that universally abnormalities appear, suggesting that abnormalities in RPS19 genes may cause specific abnormalities in hematopoietic tissues.In addition, it has been reported that the factors that help the biosynthesis of ribosomes (there are more than 200 kinds) may also cause diseases.Even though these are all genes that are expressed throughout the body, it is the greatest mystery whether the disease is specific to each mutation.

How to solve the mystery, how to challenge…

We are working on a hypothesis that has never been used in our research.For many years, we have been conducting research believing that ribosomes and diseases are linked.This is a field that was rarely noticed until the DBA example was reported.Now that we have established a new research field called “ribosomal disease,” We want to find new functions of ribosomes using zebrafish.Cells in the body need a specific protein group to fulfill their respective roles.The function of the ribosomes which synthesize these proteins is a theme that no one has tackled 、、、whether the cell is uniform or has specificity.If there is specificity, it is thought that the mechanism that the organization-specific abnormality (disease) occurs can be explained.For example, when the protein required for the differentiation of red blasts is synthesized, if RPS19 plays an important role in the ribosome, the red blasts become anemia by the abnormality of RPS19, and so on. 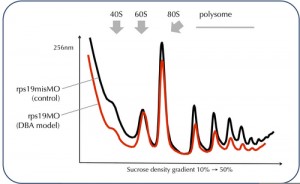 We are using the latest genome editing techniques and basic molecular biology techniques from traditional ribosomal analysis methods.Although it is a small-scale laboratory, the goal is to produce highly original results through collaborative research with various universities.Keywords include gene knockdown, CRISPR/Cas system, next-generation sequencing, polysomal analysis, RNA modification analysis, Bioinformatics 、、、, etc.It is one of the important work to communicate with zebra fish every day. 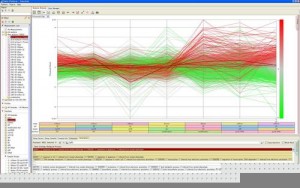 The study of pathogenesis of disease is also to clarify the mechanism of living organisms.It is a sense that the mysterious phenomenon of life is made a research object.On the other hand, I think it is also important to conduct research closer to patients.We started a new drug screening using zebra fish.The zebrafish embryo (DBA model) with less red blood cells is cultured in various compound solutions to analyze whether anemia symptoms are restored.The advantage of screening with an individual is the ability to assess the effects of red blood cell production and the presence of adverse reactions at the same time.”Drug discovery” is not an easy thing to do, but it is a worthwhile theme.

2.The role of RNA modification

Many of the non-coding RNA (ncRNA) that do not encode proteins have been found, and there is a great interest in the workings of these RNA.In addition to ribosomal RNA and tRNA, recently the modification of small-molecule RNA has been identified, and RNA modification may be an essential mechanism for RNA function expression.However, there has been little analysis of the role of RNA modification.As with epigenetic changes such as DNA methylation, we believe that RNA modification also plays an important role in regulating biological functions. 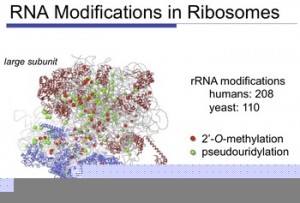 We are working on systematic analysis by focusing on the function of RNA modification and the relationship with the disease.In particular, focusing on the low molecular RNA (snoRNA) related to the modification of ribosomal RNA, the preparation of the snoRNA database, such as fabrication and analysis of modified defect model using zebrafish, We are conducting research using genomic science and molecular genetic methods.It is still a unexplored area, but we believe it is a challenging challenge with great potential.

We use zebrafish irradiated with low dose radiation as a model, 1) to clarify the biological effects at the transcriptome level, 2) screening substances that inhibit biological effects from the compound library.We are working to analyze theI hope this research will help alleviate people’s anxiety about radiation.

The components constituting the ribosome are present in common to all organisms and are stored high among other species.We have focused on this feature and have done a lot of research so far.As the main theme, we aim to elucidate the mechanism of ribosomal disease.In addition, by extracting the pattern of the nucleotide sequence of the RP gene using informatics, analysis of the mechanism to control the cooperative expression, and also to infer the acquisition and disappearance of introns in the process of biological evolution, we have reported the results of research.The basis for these analyses is the RP gene database (RPG) and the small nucleolar RNA database (snOPY).Protein synthesis is a process of expression of genetic information, and despite an important phenomenon that can be said to be the cornerstone of the life phenomenon, the database on RP is the only RPG in the world.

On the other hand, snoRNA is a generic term for low molecular RNA of nucleolus that guides the modification of non-coding RNA, such as rRNA, and the structure of the gene is so complex that it cannot be explained unconditionally.For example, about 80% of the snoRNA genes found in Arabidopsis constitute clusters on the genome, but conversely, about 80% of budding yeasts exist alone.In addition, in humans and vertebrates, many snoRNA have been found in intron intrinsic type.These are known to snoRNA in introns, such as RP genes, and to express through splicing from mRNA precursors.Since the snoRNA gene in a variety of organisms is such a special configuration, it was impossible to mechanically develop the information when constructing the database for orthologs.We built a snOPY database with knowledge and experience. In recent years, the existence of a translation regulating mechanism by ribosomes has been suggested, and there is a great deal of attention in relation to its failure and ribosomal disease.This laboratory database is expected to become an indispensable tool to analyze the various functions of ribosomes.

Our laboratory is looking for graduate students. For details, please refer to the Graduate Student Announcement. If you are interested please contact us by email.